Testimonials from our grantees

The following are testimonials from a few of the groups we have funded recently, and why they think you should support the Edge Fund! For an overview of all groups we've funded, check out this page.

"Over the last year, thanks to Edge Fund, as well as members’ dues and other sources of funding, Living Rent has been able to support tenants have a voice in the housing system and challenge some of its unfair and exploitative practices.

We have supported over 50 tenants with individual housing issues (repairs, stolen deposits, illegal fees, incredible mould and damp, asbestos) through collective action and support. This has developed the skills of a team of 10 volunteers to act as ‘member defense volunteers’ who are now able to signpost, support and plan actions to help tenants resolve their issues. We have taken direct action against several letting agencies, with quite a few wins for tenants, saving thousand pounds worth in repairs, deposit claims and illegal fees."

"We were very successful in the 2017 mayoral campaign in Greater Manchester to shift the terms of the debate towards addressing this issue. The money that we received from the Edge Fund was absolutely key to building on this success and running a series of campaigns to raise housing and homelessness on the political agenda and hold politicians to account.

The funding helped support the launch of the Greater Manchester Renters’ Forum, formed by renters for renters, to build a voice for change in the private rented sector in Greater Manchester. We had over 100 renters in attendance who were able to raise concerns with Mayor Andy Burnham and key councillors on issues from the lack of awareness of renter rights to poor conditions and lack of affordability. The money from Edge Fund helped support the transport costs of the facilitators of the session and to reach out to and mobilise groups who would not normally come along to events like this."

Sisters Uncut is a feminist direct action group set up in 2014 to fight the extensive cuts to services for survivors of domestic violence, which has seen budgets slashed by a quarter since 2010. The Edge Fund grant helped to support direct actions and community organising across the UK as Sisters has seen self organised groups sprout in Glasgow, Bristol, Newcastle, Liverpool and many others. We've put a lot of efforts into supporting these new regions and developing national organising tactics.

A key principle for the group in how we use our funds is removing barriers to access that so many people are faced with everyday. We try to ensure that our organising is accessible to everyone by providing travel expenses, childcare, suitable venues and supporting people to attend meetings and events. There can also be many unseen costs of organising actions that are politically and visually engaging including flyering, posters, banners, equipment/tools to support direct actions and the food and drinks to nourish the feminist movement.

People should support Edge Fund, because there are very few funds that are accessible to grassroots groups, community led projects and groups. Lots of thought has been put into limiting the bureaucracy of the process, and placing trust in the knowledge and experience of those on the front lines.

African Rainbow Family (ARF) is a non-for-profit organisation that supports lesbian, gay, bisexual, transgender intersexual and queer (LGBTIQ) people of African heritage. With support from Edge Fund we've been able to help our members to feel empowered to better understand and take leadership in their asylum cases and in knowing their rights but also to challenge the immigration system. We pay for people's travel expenses to meetings and events, and for appointments with lawyers and reporting to the Home Office.

Becoming members in Edge Fund and helping out in the funding rounds has allowed us to become part of the ecosystem of wider left organising and feel like we can give back in some way. So much of the experience of being a migrant or ayslum seeker is isolating, disempowering and created to break our spirits. Being a part of Edge Fund has meant we're learning skills like facilitation, application writing, understanding more about community organising and radical politics and most importantly being valued members of society which sets many of us up for what happens after the ayslum cases when we can finally enter the world of work.

People should support  Edge Fund because its an integral part of radical political organising, and supports the groups and people that many others can't and won't. African Rainbow Family has benefited hugely from its existence.

Munya Barnet work to challenge the discriminatory practices of local and national government service providers, and tackle the social exclusion, media demonisation, and political marginalisation of Gypsy Roma Traveller people. With support from Edge Fund, we were able to buy much needed equipment to support our community organising such as our computer which we used to work with women in the group helping them to develop their skills. Lots of our organising centres women and the institution of community days for the wider gypsy traveller community.

This coming together allows us to strategise on how we challenge media biases about gypsy/traveller communities and to organise together against discriminatory policies. For example we partnered with Hackney Gypsy Group to challenge London Planning on Housing in Camden. Our message shared through posters and materials asked the Mayors office to create sites specifically for gypsies and take care of the existing ones.

During the Edge Funding Day we learnt about the work of people across the UK but also specifically made connections with a Roma group from Scotland. Gypsy Roma Traveller communities are often very isolated, so spaces for more connectedness are so welcome.

People should support Edge Fund because the voices of people in need are being heard through Edge Fund. It's more than just the grassroots groups who are going to help and raise funds. I'm glad to see that Edge Fund hasn't got restrictive policy and works at a community level. I believe that our voices have been heard, and funds are being distributed. It makes you feel comfortable.

Black Lives Matter UK is a coalition activists across the UK who are organising in the long tradition of radical black organising. We are stuggling for black people to live in safety and dignity without their bodies being policed, for the un-recognised murders of black people by the police and other government representatives across the UK to be brought to justice, for the ended prosecution
of black trans people on the streets and in prisons, to stop the deportation of migrants from this country, to stop the disregard of the human rights of black and brown people who are seeking asylum in this country, many of whom have been displaced due to wars, the effects of climate change and the legacies of colonialism. Our methods include direct action, community organising, and political education.

We attended the seventh Edge Fund funding day, in Birmingham on July 15th 2017. Aside from being held underneath a church -it was honestly one of the most radical modes of fund distributions I’ve ever experienced with activists and community organisers deciding where the money goes – pooling together our diverse expertise, experience and passion to share a little between a lot. We were particularly moved by meeting Frack Free South Yorkshire due to our particular interest in climate change and didn’t even know they were trying to start hydraulic fracturing in England and also meeting African Rainbow family – an amazing collective of African’s living in the diaspora and on the continent connecting for the rights of LGBTQIA+ folks seeking refuge/asylum/rights. But all of the groups were just phenomenal and it was so invigorating to know how much grass routes work is being done all over the country across the issues of sex worker rights, housing, climate change, LGBTQIA+ rights, mental health, addiction recovery, and racial justice. BLMUK is the UK chapter of Black Lives Matter, There were over 3000 deaths in the Mediterranean in 2016, all of which were avoidable.

The £3000 we were awarded from Edge Fund creates an incredible opportunity for us to invest in young people by funding a BLM UK summer school and supports us to connect with other black activists organising across Europe to skill-share and collectivise. And that is just the beginning.

The grants we've received from Edge Fund have made a huge difference to our organising, through the smallest things. We've been able to purchase our own megaphone, ensuring disabled people in Glasgow can literally have their voices heard and centred. We purchased a hard drive, printer and mobile phone creating our own portable office helping us to organise more sustainably.

Crucially, we've been able to make DPAC a lot more accessible through giving travel expenses and supporting people whose conditions are bad, and ensuring we can be involved in direct actions across the UK and getting people to meetings. Its all too easy to become isolated as a person with disabilities. When the Council Budget was being passed - which was going to hugely impact poor people with disabilities - we got ourselves organised to able to attend the demonstrations and to rally the wider community to understand its impact. 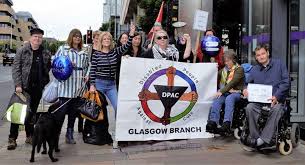 Other things that have come through our relationship with Edge Fund has been learning things like how to talk and write about what we do, in a way that people understand. This is through writing the applications and attending the funding days. It was one of the first applications I've ever written, and it was scary but it focused me and I was successful.

We've travelled to London and Birmingham for the funding days, and met such a varied bunch of amazing activists like Smash IPP, I had never heard of the issue their campaigning about. It's a real melting point, and people are listening and learning from each other's work, it's not often you get an opportunity like that.

People should support Edge Fund it because it's funding direct action, and the real injustices in the world and involving ordinary folk. The chickpeas are a bit funny, but it works and people like myself who are working class and struggling with multiple oppressions get the chance to have a say.