Our sixth funding round completed in the 2016/17 financial year. The round 5 funding day took place in London 23 January 2016, agreeing grants of £40,000, just before the 215/16 year end and there were still some grants to pay. Round 6 opened in May 2016 and the application deadline was extended and pot increased by £20,000 to a total of £60,000, in response to political events. This resulted in us receiving a massive 380 applications. The funding day took place in Manchester 1 October 2016. Total grants paid out in the financial year totaled £73,338.

Our funding day in Manchester for Round 6

Donations received this year totalled £46,258. This included around 100 regular donors (bringing in around £19,000) and some larger one-off donations (totalling around £27,000). In the first few years of Edge Fund we received three large donations of around £80,000 – £90,000 which has sustained us until now and put us in the fortunate position of not having to focus too much on fundraising. However, this will now need to change.

In 2016, the Influencing Funders Group (Edge members Susan, Isis, Patrick and Rose, supported by input from other members and staff) presented the Edge Fund to influential funders in five major events and more than half a dozen individual meetings and articles.

Two funders that we had worked with previously, Heinz Endowments and Brixton Pound, got in touch to say that they had been influenced by us to use our process as part of their grantmaking.

In the previous year (January 2016), Isis had facilitated a visit to London for  Heinz Endowments, where they attended our funding day. They subsequently donated $5000 to Edge as ‘consultancy fees’, which we have used to support some influencing funders activities over the year. 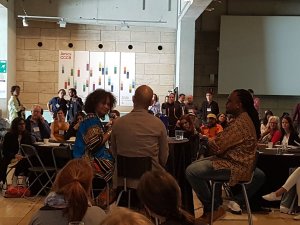 We were represented at the EDGE Funders Alliance conference in the US by Rose in April 2017. At this, we met many like-minded funders, such as Pollination Project, who asked to be added to the ‘other funders’ page on our website, as well as taking part in sessions on alternative philanthropy.

We also attended an EDGE Europe event in Paris in June 2016, where Rose supported the session on setting up a new participatory grantmaking fund.

We were invited to present at an event for UK foundations titled ‘Funding People-Powered Change’ in June 2013. This was an academic from the US, Hahrie Han, who was on a tour supported by ActionAid. Edge member Natasha Adams organised it, Rose presented on Edge Fund, and Edge member Susan Seymour attended.

Patrick attended the launch of the Radical Renewable Art & Activism Fund in July 2016, where they spoke of being inspired by seeing Sophie speak about Edge Fund. Isis met with the International Human Rights Funders Group in New York in September 2016. They invited us to join, especially as they have a participatory grantmakers group, and agreed to waive our registration fees, so we joined later in 2016.

Rose went to a workshop in December 2016 where she presented on Edge to a group of funders and European civil society activists, where the intention was to look at new participatory funding models. Natasha then went to the follow-up workshop in January, to support the establishment of a new participatory fund. They were sponsored by EDGE members Open Society Foundation Initiative in Europe, Charles Leopold Mayer Foundation, Guerrilla Foundation and the European Cultural Foundation. Rose wrote a report for them on the December meeting, for which they donated 200 Euros to Edge.

In December 2016, Isis went to the Global Summit for Community Philanthropy in Johannesburg, sponsored by the Global Fund for Community Foundations. She presented a poster which she’d put together (showing our process and purpose), which we now use for other events.

While Rose was living in South Africa in January 2017 she attended a meeting in Johannesburg organised by Civicus, mainly for international funders (including government, corporate etc, not just foundations or community philanthropy). She gave the only formal presentation of the week, on the Edge Fund model as an ‘alternative future’.

Isis has written an article for Indie Philanthropy website about Edge. Susan and Isis met the Joseph Rowntree Reform Trust who were doing doing a review of the funding and wanted some input. We also met with the Seedbed Trust, Ben and Jerry’s Foundation, and the Baring Foundation.

At the end of 2016 we also spent a lot of time preparing for three major events happening in early 2017. We were asked to present at: the EDGE conference, the European Foundation Centre conference, and the Network for Social Change conference. 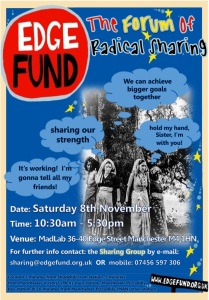 We held several Fora for Radical Sharing, to bring our applicants together to support one another

Our main outreach events are our funding days, fundraising workshops, occasional fundraisers and Forum for Radical Sharing, which aimed to bring groups together to share learning and create an environment that might support collaboration. We have run 3 Forums for Radical Sharing, in Manchester, London and Glasgow, and an evaluation was written up and shared with members in February 2016. No decision has been made as yet about the future of these events.

We held an application workshop in Glasgow 22 June. In May Natasha ran a session on fundraising at Campaign Bootcamp. Kwesi was also involved in Spark!, an event consisting of workshops and other sessions focused on social justice.

Much of our resources go into supporting an accessible and democratic process. Our staff work hard to get word out across the UK and Ireland to various movements and groups, and support applicants to apply. We take time to check applications for clarity to ensure each applicant as fair a chance as possible at being successful.  Applications are also categorised so that they first go to their relevant Community Committees (disability & health, LGBTQI+, low income/ working class, women/ oppressed genders, race & ethnicity, gypsy, traveller & Roma, migrants & refugees) and Advisory Groups (environment and political/ economic systems). Staff then support members to score applications, collate the scores, draw up short-lists and then organise the funding days, which also involves arranging travel for groups to attend. Staff are also responsible for recruiting and supporting new members.

Another time-consuming part of our process is providing feedback to applicants who have requested it to guide their future applications. Part of being accountable and fair to applicants is taking the time to investigate and resolve concerns when groups feel their applications have not been given due consideration. This can be a lengthy process, often involving meeting the group.

We support campaigns and organisations that aim to fundamentally reform our justice system, including the very successful Joint Association Not Guilty By Association campaign

We are committed to constantly evaluating and changing our processes, with input from both members and applicants. For example, this year, with fresh eyes from new staff, we developed a new application form and made changes to the questions to help guide applicants better.

This year was a steep learning curve. The staff were still relatively new in post, having started August 2015 with a lot to learn about the processes, values and membership. The Edge membership also had a lot to learn about employing staff and getting the balance right between working without hierarchy and providing guidance and direction. Jury service and bereavements also made it a difficult time personally for staff and in terms of managing workload. At the end of the year, after a full review of the staffing structure, we restructured to move from three 2-day a week regional organiser roles, to two 3-day roles with greater emphasis on administration and communications and fundraising. 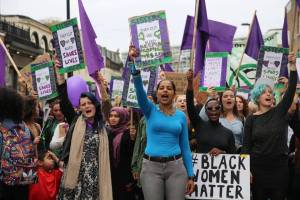 We have funded Sisters Uncut, which is an exciting feminist direct action group taking action to defend domestic violence services

At the beginning of the financial year we had 105 members. However, many of these members joined some time ago and were not active. At the last AGM we agreed that we would formally ask members to confirm their membership each January to ensure that the membership was committed and to give us a clearer idea of who are members are. We did this for the first time in January 2017, with 36 members confirming their membership. At the AGM we also agreed that we would formally ask funded groups to assist with scoring applications in the next funding round, which takes pressure off us having to maintain a large membership but also ensures there is some healthy turnover amongst those scoring applications.

Members make up our Facilitating Group (FG), which takes care of work behind the scenes and keep things moving. The FG usually comprises between 6 and 8 people.

This year we agreed upon a new process for new member applications. Rather than new members doing a trial scoring exercise, which is time-consuming for new applicants and those supporting them, we agreed that they would instead take part in the next funding round but that their scores and comments would be checked by the FG before being accepted, in consultation with Community Committees and Advisory Groups as necessary.

During the year the following members meetings took place: