Thanks to Jim from Belfast Solidarity Centre for this great blog about our last funding day. You can read about the groups that received funding here: Round 6 grants

Thinking about it, the space for the last Edge Fund funding day, all bare brick walls and weathered wooden floors, did look a bit like the ‘lair’ in Dragon’s Den – but where were the grovelling entrepreneurs, sweatily selling themselves to the highest bidder? Where were the business moguls, enthroned in wads of cash, toying with their pitiful prey, prodding them to jump through hoops? The good news is that Edgefund is nothing like Dragon’s Den. In fact, it’s probably Duncan Bannatyne’s worst nightmare – money being given away to people who need it, no strings attached, and most of these groups are trying to dismantle capitalist society and its many oppressions. Well, you know where you can go if you don’t like it Duncan, but I’m in. 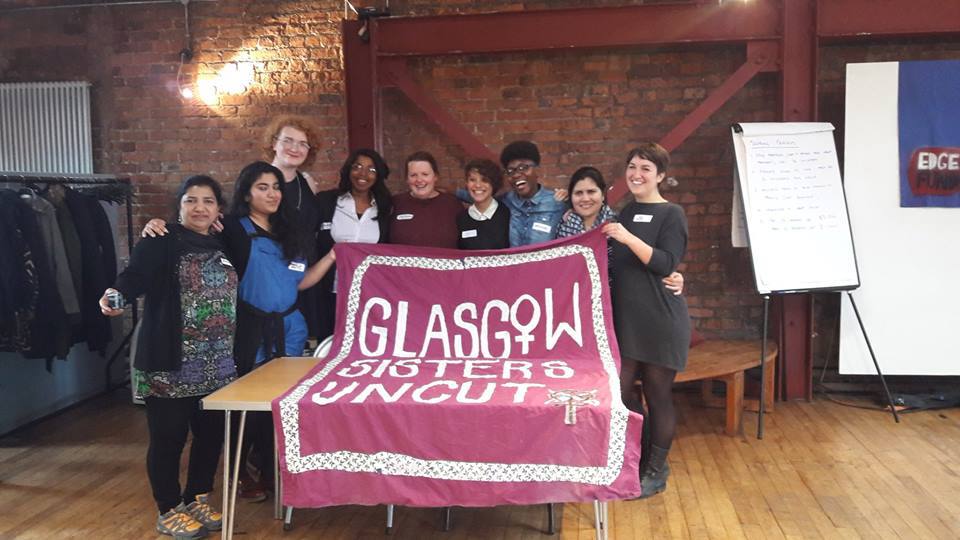 The Edge Fund funding day, on Saturday 1st October 2016 in Manchester, was the second one I’d been to. I was there on behalf of Belfast Solidarity Centre again. The £1500 we were granted in January helped us to set up our space in Belfast city centre, which now houses a drop-in centre, bookshop, library, café, and print workshop, and we were hoping to get some more funding in this round to complete renovations and help us along with some of our education and workers’ rights initiatives. Still bleary-eyed from a dark autumn morning wake-up, I touched down at Manchester airport and hurried through the airport with my backpack full of banners and leaflets, to catch the next train into the city centre. We might have gone a bit overboard on the banners... but y’know, I think the bright images and slogans helped us stand out a bit among the information stalls. I actually got a bit lost, having stomped too far along the Ashton Canal and ending up at City’s ground (always unnerving for an ex-United supporter). I knew the space was in a re-purposed old mill building, but there are a fair few in the Holt area, and I’d wandered my way through most of the rest of them by the time I made it to Bridge 5 Mill. 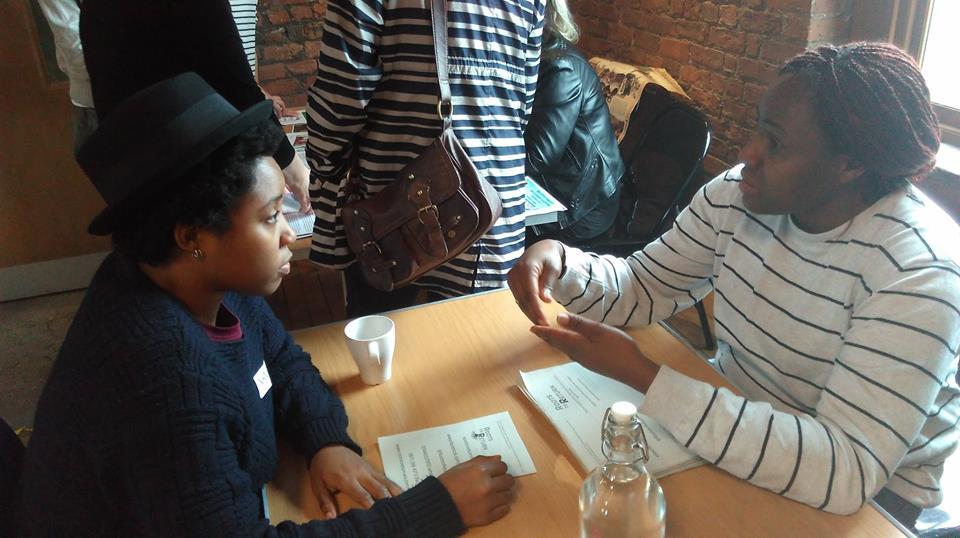 I pushed open the door at the top of the stairs to be greeted with the large semi-circle of chairs which typifies any direct democratic meet-up, and a mix of faces, young and old, many different creeds and colours, representing venerable projects from all over Britain and Ireland. I sat down beside a person who turned out to be from my old haunt in Leicester, and we had a good chat over some tea and biscuits before the day kicked off properly. Well, actually, that makes it sound as if the chats aren’t the ‘proper’ bit of an Edge Fund funding day, but they’re probably the most important aspect. Later in the day I got talking to someone who grew up in the same little sticksville town as me! It is indeed a small world, and days like this remind you that there are more good people in it than we often remember. 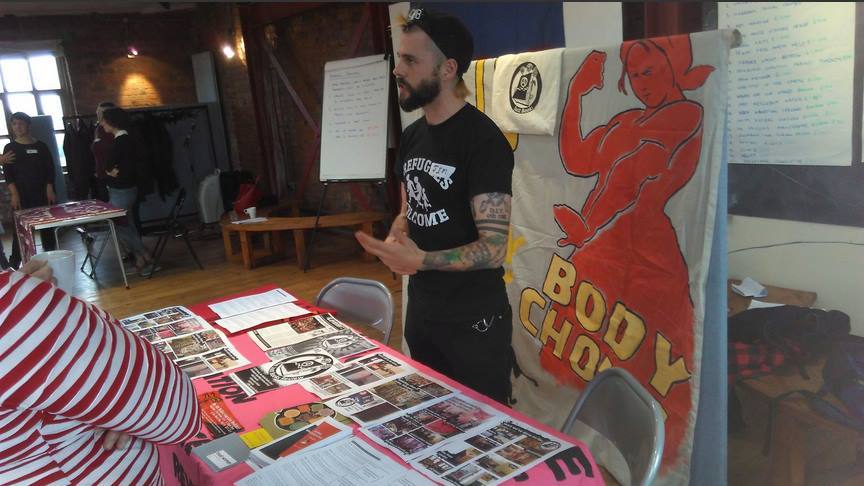 The assembled representatives started by each giving an overview of what their group does and what they would do with the extra funding, with a strict (and strictly enforced) two minute time limit. There was more time to find out about the groups and talk to people during the information stall sessions, though their description as ‘market stalls’ got my anti-capitalist heckles up a bit. All the groups were already guaranteed £1500, but would receive another £1500 if they were one of the top ten groups in Edge Fund’s patented chickpea-based voting system. The discussion co-ordinator also asked each group if there was anything they hoped to gain from the day. The first eight or so groups, myself included, all said they hoped to meet people, or to network, or to hear inspiring stories – but then, about halfway round the circle, someone said they hoped to get the money, which seemed to start a bit of a trend because everyone else in the circle then said the same! I guess some cultures are less shy about talking about money, or maybe it was an effect of the Dragon’s Den décor, but this open display of competitiveness made me feel a bit uncomfortable. Maybe that’s strange, because of course the money was an important factor – we had all applied for money, and we would all be spending money to do good things. Edge Fund straddles this uncomfortable interface between activism and money. Some aspects of a ‘normal’ funding model are there (groups effectively ‘make a pitch,’ some groups get money, some don’t, there are eligibility criteria), but Edge Fund turns it all on its head. The criteria actively encourage groups who wouldn’t otherwise get funding because they are too radical or ‘financially unsustainable.’ There’s no grovelling. No jumping through hoops. No accounting for the money spent with impact reports and receipts. The money comes from fellow activists, and the funding day is an inclusive exercise in direct democratic resource allocation. Duncan Bannatyne would really, really hate it. 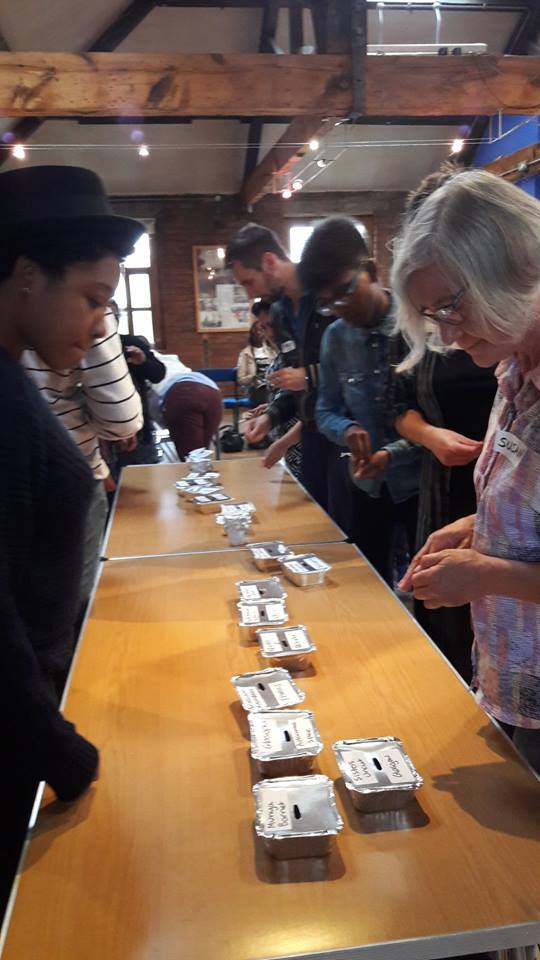 The money pressures and mind-sets of capitalist society invade all of our lives, even among anti-capitalist activist groups. Edge Fund minimise the compromises and enable people to do good things. It’s not perfect, but it’s not bad, and I for one am delighted to have been involved with them. Belfast Solidarity Centre were lucky enough to receive £3000 in the last funding round, which will help us in so many ways – and personally, I was, again, totally inspired by the whole process.