The following text (but not the images) is from the book Robin Hood Was Right, A Guide to Giving Your Money for Social Change, By Chuck Collins, Pam Rogers and Joan Garner (W.W. Norton, 2000). Reproduced with kind permission from the authors.

We give to help the poor, but poverty prevails. We contribute to save the environment, but corporate destruction of our land and waters continues. We donate to shelters, but millions remain homeless. We provide for health care research, but cancer and AIDS still claim our loved ones.

Much of our giving is limited to “safe” causes as we support services that provide temporary relief but do not challenge the status quo. Our efforts temporarily alleviate problems, but in the end they allow the symptoms we see today to grow tomorrow.

For all the good it does, we see modern philanthropy reinforcing what is, instead of working towards what could be. We see it focusing on immediate symptoms or results of social and economic problems, rather than on root causes. This is why charitable efforts often fail to achieve lasting solutions. In our view, it’s time for a new focus on change, not charity.

Social change can be a slight shift, an alteration or reversal in the status quo, that brings about institutional, or systemic change. Common understanding about what is right and true can change. Social change is embodied in new laws, procedures, and policies that alter the nature of institutions and, in time, the hearts and minds of people. Social change affects how we treat each other (African Americans no longer must give up their seats on buses to whites); what is considered “normal” (girls can play competitive sports in school); and established ways of doing things (“experts” are no longer trusted to make environmental decisions without community input).

Progressive social change is characterized by its insistence on addressing the root cause(s) of problems rather than the alleviation of symptoms. Because the goal is systemic change, conflict with those who hold power is often inevitable. The power that social change organisations bring to the table is their ability to organise, to educate, and to mobilise.

Money alone does not bring about change; neither do individuals. But when individuals band together and form organisations to focus on their collective power, social change can happen. When a large number of organisations work together toward a common goal, that’s a movement. Movements make change.

When you give for social change, you give to organizing. To organize, according to a paraphrase of Webster’s, is: 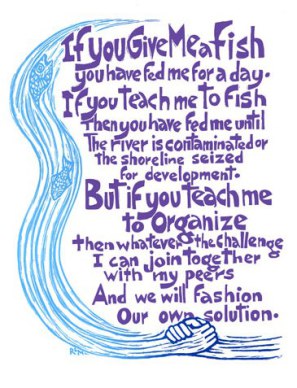 That’s organising! All these pieces – to urge others to join, to develop a unity of purpose (goals), to make plans and strategies, and to build and strengthen ties among members of the organisation – all these activities build organisations.

The goals of social change organising:

What do social change organisations do? They must analyse and agree on root cause(s) of the situation or problem, determine goals, decide on a course of action, educate and organise their constituents, and raise money. People join social change organisations out of both self-interest and compassion for others. The act of coming together to hammer out strategies and goals builds unity.

Analysing the root causes of why a situation exists is a primary difference between charity and social change. Charities don’t ask why. Social change organisations do.

Progressive social change ideas are often initially greeted by the larger society as dangerously radical or outrageously impractical. This was true when abolitionists argued that slavery was immoral. It was true when reformers tried to end child labour and suffragists claimed women should have the right to vote. In the 1930s, facing a nationwide depression, workers demanded jobs, unemployment insurance, a minimum wage, and government relief for the millions who were starting and homeless. Once more these “radical” demands were met with disbelief and outrage.

Examples of change vs charity 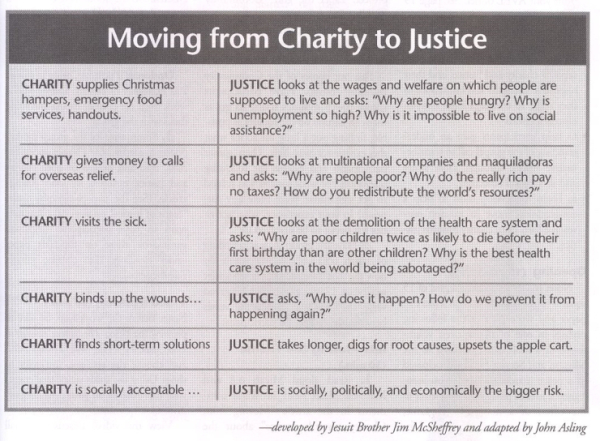